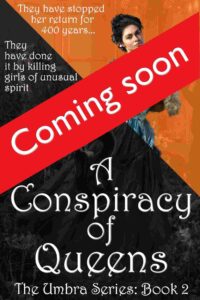 Chapter One - A Conspiracy of Queens

The three new passengers huddled into the coach seats. Arthur’s coach had picked them up from beside their overturned carriage two miles beyond Swanage. To his inexpert eye it looked as though their carriage had stumbled off the contorted rolling road in a thicker swirl of mist and thrown a wheel. It canted at an awkward angle and blurred shapes of mist-men were working on it.

Even upended and smoked with the sea fret, the carriage reeked of money.

Arthur’s own journey had begun four days ago from London on a crowded stage coach. This last day from a coaching inn at Lytchett Minster to Swanage had been slow progress on corrugated roads, slicked by frost. At Swanage Arthur had reminded the driver of his need to go onto Netherwyck. The man’s face set as bitter as the weather, but his employers had an agreement with Lord Lisle to ferry guests the four miles beyond Swanage to his estate when need arose. It was an agreement made for summer, not for fading afternoons of frost, fret and scant visibility, but Lord Lisle had not taken his household to London this winter. The driver and his guard had been looking forward to an early start in the ale-houses of Swanage and made their discontent known.

They had come across the overturned carriage on a lonely stretch of road beyond Langton Maltravers. Branches of spectral beech trees overhung the road, their trunks fading in and out of view with the churn and coil of the mist. The calls of lost birds wished an end to the afternoon.

They picked up four in all: two young women, disguised in borrowed great coats that looked to have been lent by portly Russian generals, and one gentleman, in a frock coat and thick breeches. His clothes spoke of quality, even down to the scarf he had wrapped around his features to keep out the cold. The fourth, a man, presumably a servant, had climbed on top of the coach.

‘We are very pleased to find you on this road, sir.’ One of the women addressed him through upturned collars and chattering teeth. She sounded young but confident. ‘We did not expect any others to be travelling to Netherwyck on such an afternoon. We must save introductions until we are safe there and sat before a fire.’

The coach returned to its lurching journey. Arthur thought the woman spoke to her Umbra as she whispered into the lapel of her coat. When he lip-read her ‘go’, before she hugged the coat closer, he imagined her Umbra had been released to return to the Other Realm.

A half-mile or so further on, they came a cry from beyond the coach.

It was followed by a loud retort and the scuffle of activity on the carriage roof.

The gentleman jumped to his feet and fell again almost immediately as the coach stumbled to a halt. The two women shared a glance as horses whinnied and stamped skittering hooves on the road outside.

Arthur peeked out and caught movement in the mist – a rider on a horse. A voice came from the coach’s left-hand side. ‘Out this way if you please, sirs. My companion has a pistol trained on the other side to dissuade you from vacating that way.’

The gentleman opened the door and spoke to the indistinct shape he found there, ‘There are ladies inside. I demand they be spared any ordeal.’

‘I have no interest in your ladies, but all must leave the carriage so that we may search it.’

The four occupants stumbled out and lined up on the road beside the carriage. The servant climbed down and joined them, while the driver tended to his shot comrade on the road some yards away.

The highwayman had dismounted. His face was disguised by a kerchief, his tricorn hat pulled low. He levelled two horse pistols at them. What could be made out from the man’s horse and thick coat suggested he prospered. A sword pushed at the confines of his riding cape.

As they complied, the gentleman spoke again, ‘You are wasting your time, man. We four have been forced to leave our luggage behind and, as for this other poor unfortunate, you can see by his coat and hat, he is unlikely to have anything worthy of your trouble.’

‘It is not your trinkets or purses I require. You sir, remove your scarf.’

The gentleman did so. ‘If it’s ransom you’re after, then I am the one you seek. You may let these others go. I am Viscount Ex –’

‘Yes, I daresay you’d fetch a good ransom, Exeter, but you are of no interest to me.’

‘Stay down and stay quiet, my lord.’ The highwayman stepped close, one pistol levelled at Exeter’s forehead.

Arthur could make out a tiny figure, wreathed in mist, standing on his shoulder, the highwayman’s Umbra. She was likely a Nymph, dressed in an insubstantial belted costume with a gauzy brown shawl wrapping her shoulders and drawn above her head. Her arms were bare with bracelets at each wrist. She was not dressed for this climate but for the weather in her own world, the unknowable Other Realm.

She spoke to the highwayman and her words drew his attention away from the Viscount to the other end of the kneeling line.

‘You two there, I require your names. One of you has travelled from London, I think.’

‘Do not give it,’ warned Exeter. ‘One is my servant, sir, and of little interest to you I’m sure. This other passenger is of no consequence and will furnish you with neither ransom or coin.’

‘Not another word, Exeter, or I will shoot one of your two fillies in her commodity.’

Both ladies uttered something at this: one a small cry, the other what sounded like a gasp of amused astonishment.

He bent low and spoke with his Umbra, ‘Yes, we must be sure. I think it the shorter fellow, but her scent will be on him if so. Can you sniff her out?’

Arthur watched as the Nymph slipped from the highwayman’s shoulder, to elbow and then, with a spry hop to the ground, she moved towards Arthur and climbed up his coat, although he felt neither her weight or her presence. She pushed her nose close to his cheek and inhaled. Arthur tucked his chin in to observe her nod of confirmation to the highwayman. Looking up, he saw the pistol straighten in his direction.

Before the flintlock could be fired, the Nymph’s eyes widened in horror just as a tiny hand came from beneath his lapel. It pulled her head hard against his coat material. A blade appeared at the nymph’s throat.

But the blade had done its work. The Nymph’s head dropped back as blood sprayed out. Her body gave a final shudder and vanished, taking most of the blood with it.

Looking up, he saw the crouching highwayman drop his pistols to claw at his own throat. A smothered gurgle escaped as the man keeled over onto the road.

It took a moment before the turn of events dawned on any of the kneeling travellers, then Viscount Exeter was on his feet. He rushed across to the highwayman’s body.

‘Who is this villain? No common scamp, I’ll wager.’

Exeter’s servant, who had run to take down one of the coach’s three lamps, brought it over, holding it above the stricken highwayman.

The kerchief was removed and Exeter swore. ‘By the heavens, I know him. It’s Wycherley, Thomas Wycherley, he’s one of The 500. He is no highwayman.’

‘No, he’s the son of a banker,’ said one of the ladies, brushing frost from the front of her coat. ‘I have refused him dances afore now.’

‘He will not ask again,’ said her young companion but found no levity in it.

‘Amorrie,’ Arthur appealed to the small dark girl, who sat in the crook of his arm, cleaning her blade on a corner of handkerchief she had teased from his coat pocket.

Her raven hair glistened wet in the light from the lamp. He hoped it was not from blood. Her fierce eyes peered at him through damp tendrils of hair, ‘Do not dare scold me. I had to. You know it so.’

‘Could you not, perhaps, have incapacitated her somehow.’

‘Her incapacity would have ended when that devil shot you. It was her life or ours.’

‘You are always too violent,’ he struggled to regain his feet.

‘Nymphs are no great loss to the world; either world – yours or mine.’ She stood, stepped off his arm and dissolved into a shadowed fissure in the air, taking only her blade, her rich-earth scent and an over-curious wisp of mist with her.

Exeter had reached him and clamped a gloved hand beneath his elbow. ‘I needs ask. Who are you, sir? Why would Wycherley want you dead?’

‘Tenebris, Arthur Tenebris, my lord.’ Arthur, still half crouching, attempted a bow. In a small voice he added, ‘An artist. We met before Xmas at Lady Rochester’s party in Marksfayre.’

‘Truly? I have no recollection of it. And what of Wycherley?’

‘I have never met him before today.’